Digital art? I never heard of this before, and I think it’s really interesting. So, our facilitator has requested our school to buy a tablet for using in our class a tool to draw in our computer. Basically, we are learning how to do art using technology. First, we paint easy arts like draw a ball and try to make it realistically. I really enjoy this class, and I hope I can do a better job at drawing things using digital art.

Chapter 1
“Wohoo!” came the happiness sound of Pardy the Leopard, running around on the cold, icy mountain, which was called Marindella. He sat down on a huge, freezing block of floating ice, hoping to see birds flying over the ocean at sunset. “Owlvy!” shouted Pardy with a grin. “Hey boy! See ya!” Owlvy the owl, flew quickly over the icy mountain with the other owls.

Chapter 2
“Haha!” came the laughing sound of an old, evil leopard, Frinom, who lived in the cave nearby the castle on the cold, icy mountain. “The King of Marindella should be me! Haha!” said the evil leopard, with his little friend, an evil frog, Venny. Frinom tried to create poisonous medicine and was planning to kill the queen soon.

Chapter 3
After enjoying his day in the beautiful environment outside, Pardy returned to the castle. “Pardy!” said the queen of leopards, Stinga. “Yes, Mama?” said Pardy. “Today we are going to have a celebration for your birthday! And I just want to say Happy Birthday to you, honey!” said Stinga with a grin. “Oh! Thanks mom.” He paused then continued: “I’m going to get dressed up, ok?” said Pardy, while running quickly to enter his dressing room.

Chapter 4
The poisonous medicine was finished being created by the evil leopard. “It is time for me to be the king! Haha!” said Frinom, while holding it tightly. At that moment, a fly flying around the bottle attracted Venny, who shot out his tongue, trying to catch the fly. But accidentally, besides catching the fly, Venny pushed the bottle out of Frinom’s hand, which caused it to fall down in a drainage pipe on a little, bird with a broken leg. The medicine actually helped this bird to fly and be healthy again.

Chapter 5
“Welcome to Pardy’s Birthday celebration!” said Stinga, showing her happiness while sharing the tickets to her guests. “Oh, thanks!” said Owlvy with a smile. “Hey Owlvy! I can’t believe you are here today!” said Pardy. “Ok thanks, bye Stinga!” said Owlvy while walking straight to Pardy. “Hey! Let’s go upstairs to eat some fresh fish from Marindella castle, ok?” said Pardy. Upstairs, Owlvy flew around showing how fun it is to have wings. Then Pardy said: “I wish I could fly one day,” while dancing slowly, following the music’s melody downstairs. As he finished his sentence, a little, glossy bird came flying around him and gave him a peck. After a moment, Pardy felt little shiny things floating around him in the air, and then he became unconscious.

Chapter 6
“Oh gosh! Where am I?” asked Pardy, while knocking his head, showing his confusion. At that moment he heard a shrill sound: “Meow! Meow!” This secret, scary sound showed up again louder. Then Pardy quickly ran to find out who it was. “That’s my pet, Kitty, the little cat!” said Pardy while looking at his cat, who was stuck on the thin branch of the tree nearby. So then Pardy quickly tried his best to help it. As he reached Kitty, a sound of tree branches cracking was heard. Just then, both Kitty and Pardy were falling down! Pardy tried his best to avoid falling. As they were about to hit the ground, something strange happened. Pardy’s hands changed to wings, which allowed him to fly and escape from being hit. Then he put his cat down and started to enjoy his new wings. Owlvy was coming to Pardy’s room to find him, but Pardy had disappeared. “Pardy, where are you?” said Owlvy, walking straight to the door. But something distracted his action. “What is it? This purple book is pretty attractive.” Owlvy paused, then continued: “I’m going to borrow this book from Pardy!”

Chapter 7
Pardy was flying over the broken icy blocks over the ocean, where he used to watch birds flying with the sunset, when: “What in the world?! Is this a dream?” said Owlvy with an excited face. “Hi there!” said Pardy with a grin, then he continued, “Can you show me a trick of flying?” Owlvy asked, “If you can fly, do you have any special powers?” Pardy said, “Emm! I don’t know. But we can try, right? Let’s do this!” He quickly flew back to his room with his friend. As both of them flew together, touching wings, Pardy’s legs became owl talons. They both were surprised, but they continued their mission without knowing that they had been recognized by the evil leopard, Frinom.

Chapter 8
“Can you change yourself back into your proper body?” asked Owlvy. “Maybe!” said Pardy.” He try to focus on his wings and his legs, but nothing happened! Owlvy advised. “Maybe you should try to put all your energy on your wings and legs!” Pardy tried it again. As soon as Pardy concentrated, there were a lot of glossy little things floating in the air, which quickly flew into his wings and legs. He became normal again and he said happily “I did it!”

Chapter 8
“Em! I hope to find out what happened to Pardy, the prince of Marindella!” said Frinom to his frog friend. “You need to follow Pardy and find out how he became like this!” said the evil leopard. “Yes, Sir!” smiled little Venny. So then Venny started following Pardy everywhere without letting him know.

Chapter 9
“Hey! I have one question that you have not yet answered,” said Owlvy. “Oh yeah, what is it?” said Pardy. “How do you become like this?” asked Owlvy, showing a confused face. “Actually, this is a great question and I’m not really sure what the answer is . But, as I remember, before I became like this, there was a little glossy bird flying to give me a peck, then I became unconscious. So I became like this!”. As Venny heard the answer, he ran quickly to tell Frinom. “Really?” asked Frinom, then continued, “I know what I can do, ha ha!”. So then Frinom created another medicine and quickly drank it.

Chapter 10
Pardy’s family was having dinner time happily. “Mom! This has been the best day ever!” said Pardy happily. “Yes it has been!” said Stinga, then continued: “Where was Owlvy?” “I didn’t know, but…” Something distracted Pardy. Pardy quickly found the owner of the sound: Frinom. “Frinom! What happened, why do you have…wings?” asked Stinga with surprise. “Your majesty, are you afraid of the new me, with half of myself and half of a vulture?” asked Frinom. “What do you want?” asked Pardy. “I want that!” said the evil Frinom quickly, pointing to the queen’s crown on her head. He was flying straight, hoping to kill the queen immediately. But his hand was caught by Pardy. “Stop that!” yelled Pardy. So they both were fighting. “Take the queen to a safe place, guards!” Pardy told the guards. So, he got hit strongly by Frinom. By the time Owlvy arrived, staying behind Frinom quietly, Pardy didn’t recognize Owlvy.

Chapter 11
Something popped up in Owlvy’s head, reminding him of a purple book that he was found in Pardy’s room. So he quickly flew to find it, hoping to find some solutions. So he went through the book. “How to become your normal self again?” Owlvy read it out loud. After finding out the answer, Owlvy quickly flew back to help Pardy.

Chapter 12
Owlvy was acting weirdly behind Frinom, trying to tell Pardy something, but Pardy was misunderstanding. So he decided to say out loud: “Catch Frinom!” Owlvy’s words distracted Frinom’s actions, who was fighting Pardy with strength. So Pardy bravely caught Frinom without being afraid of him. Now Owlvy had a chance to complete his work. First of all, he put his ten fingers on the middle of Frinom’s back and screamed loudly “Safirasonyrato!”. As he finished his words, many glossy little things floated in the air out of Frinom’s body. Then Frinom became normal again. “Guards, take Frinom to the prison!” Four guards came quickly to take him. “Thanks Owlvy!” said Stinga and Pardy. Then Owlvy gave Pardy the purple book, and started to talk about it with him. When the evil frog, Venny, knew that Frinom was in the prison, he was pretty scared. So he decided to escape from Marindella, and changed himself to be a better frog.

Chapter 13
“Cheers!” said Pardy. The whole family happily enjoyed the celebration. Then two years later, Pardy was getting married with a beautiful leopard princess from another castle. They respectfully said thank you to their mothers in their wedding celebration. The king, Pardy, lived with his queen and friend, Owlvy, happily ever after.

On 23 January 2016, Liger had launched another book called The Illustrated Guide to the Wildlife of Cambodia. I am one of the authors and illustrators in this book. Our group members has putted a lot of hard work in this. So we really proud with our book! In this book, I have written 8 species, 2 ecosystems, and 4 of my painting had chosen to put in the book! This project had create a lot of changes for me including being determent, proactive, and inspire me to know about the meaning of ART! 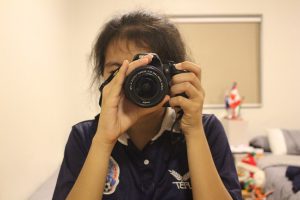